Learn the useful list of common English idioms with their meanings and example sentences. 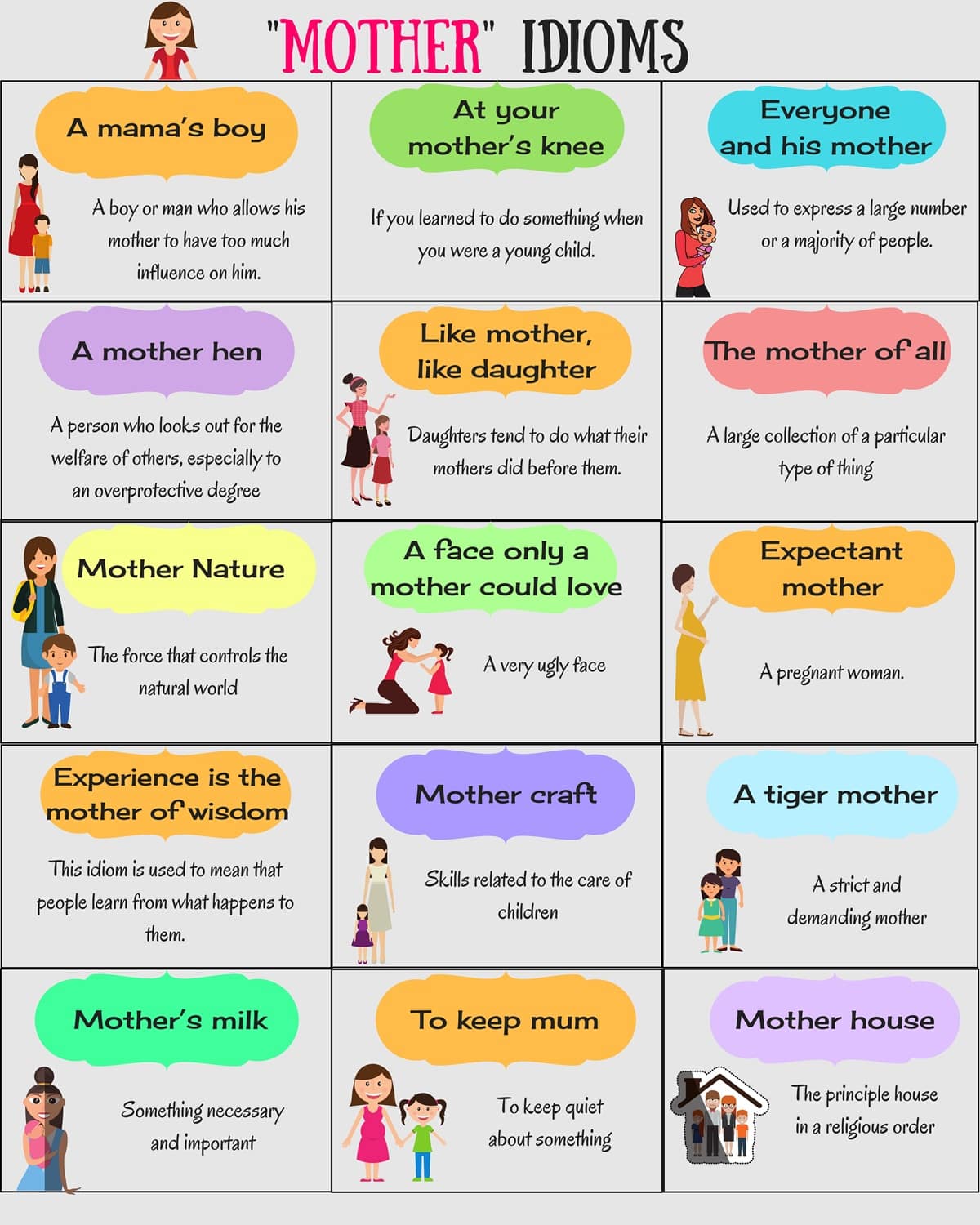 E.g. I thought I loved him until I realized he was a momma’s boy who can’t do anything without his mother’s permission or approval.

E.g. I learned how to bake at my mother’s knee when I was just a girl.

E.g. I’m so jealous, everyone and his mother is going on a vacation this summer except for me.

E.g. Jenny can be a bit of a mother hen when we’re out at the bars.

E.g. Can you make a decision on your own, or are you tied to your mother’s apron strings?

E.g. My mother loved sweets, and everytime my father saw me with a cookie in my hand, he would sigh, “Like mother,like daughter.

E.g. Wow, that is the mother of all sandwiches.It’s a foot high!

E.g. Look at all the wonders that Mother Nature provides, from fruit and vegetables to beautiful mountains and oceans.

E.g. The poor baby has a face only a mother could love.

E.g. I know the subway’s crowded, but you should really give your seat to the expectant mother standing by the door… 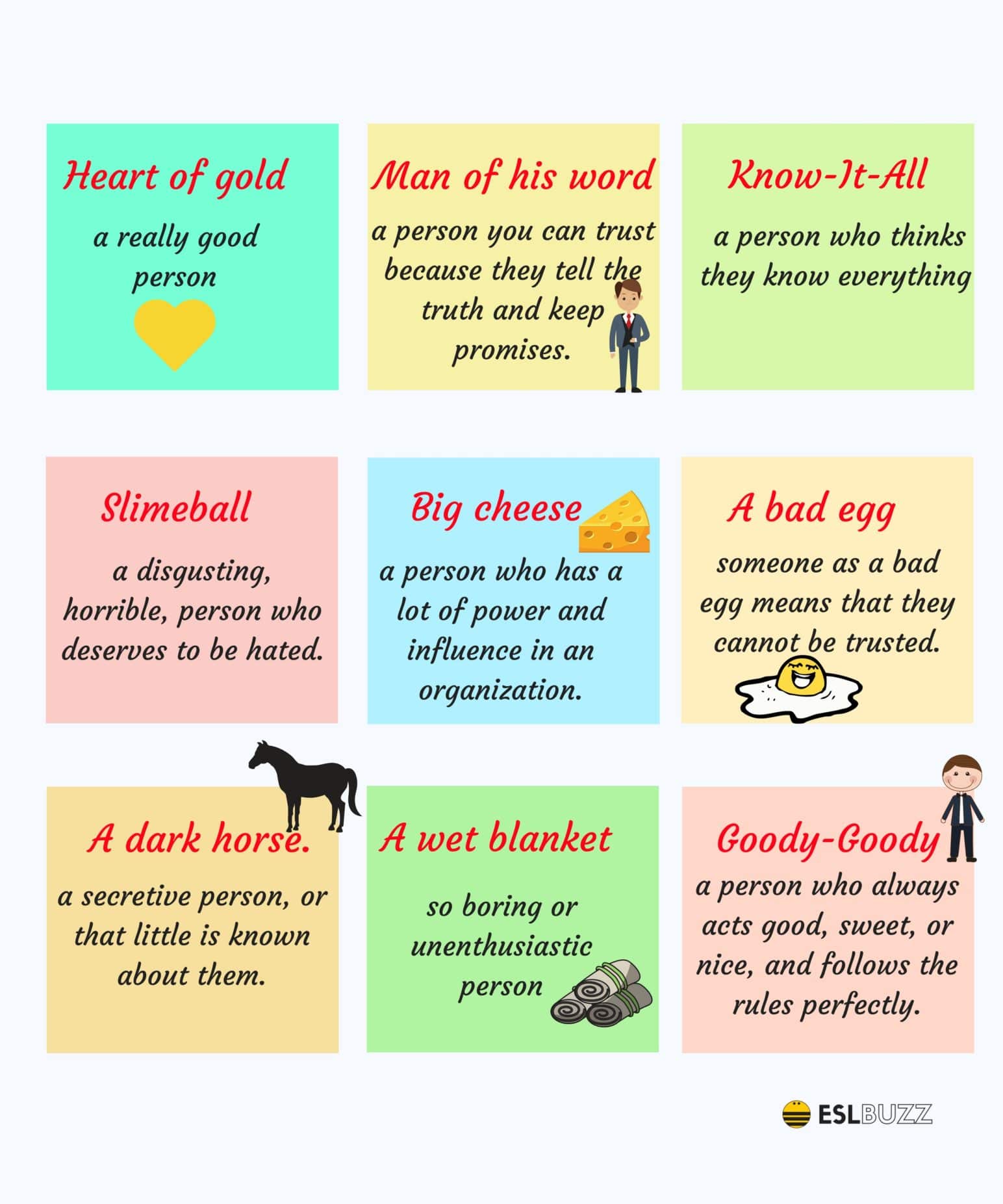 Eg: I admire Jamal because he always sees the sunny side of life. He’s a born optimist.

Eg: She always does her English grammar homework and even asks for extra exercises on the weekend. What an eager beaver!

Eg: In her senior years, when she finally had the luxurious freedom to sleep in, Delores became an early bird and got up every morning at 5:00 am.

Eg: Even as a young girl, Ida showed herself to be an earth mother. She always helped her mother to look after her younger brothers and sisters.

Eg: Since the birth of his twins, Harvey has become a family man. He spends all of his spare time with his children.

Eg: It isn’t surprising that Isaac has made it to the top of the corporate world. He was always someone who went after what he wanted, a real go-getter.

Eg: Marry was the type of person who would have helped anyone – a real good egg.

Eg: From auto repair to hairdressing, Frank can do it all. He is a jack-of-all-trades.

Eg: You can trust Samuel. He is a man of his word… 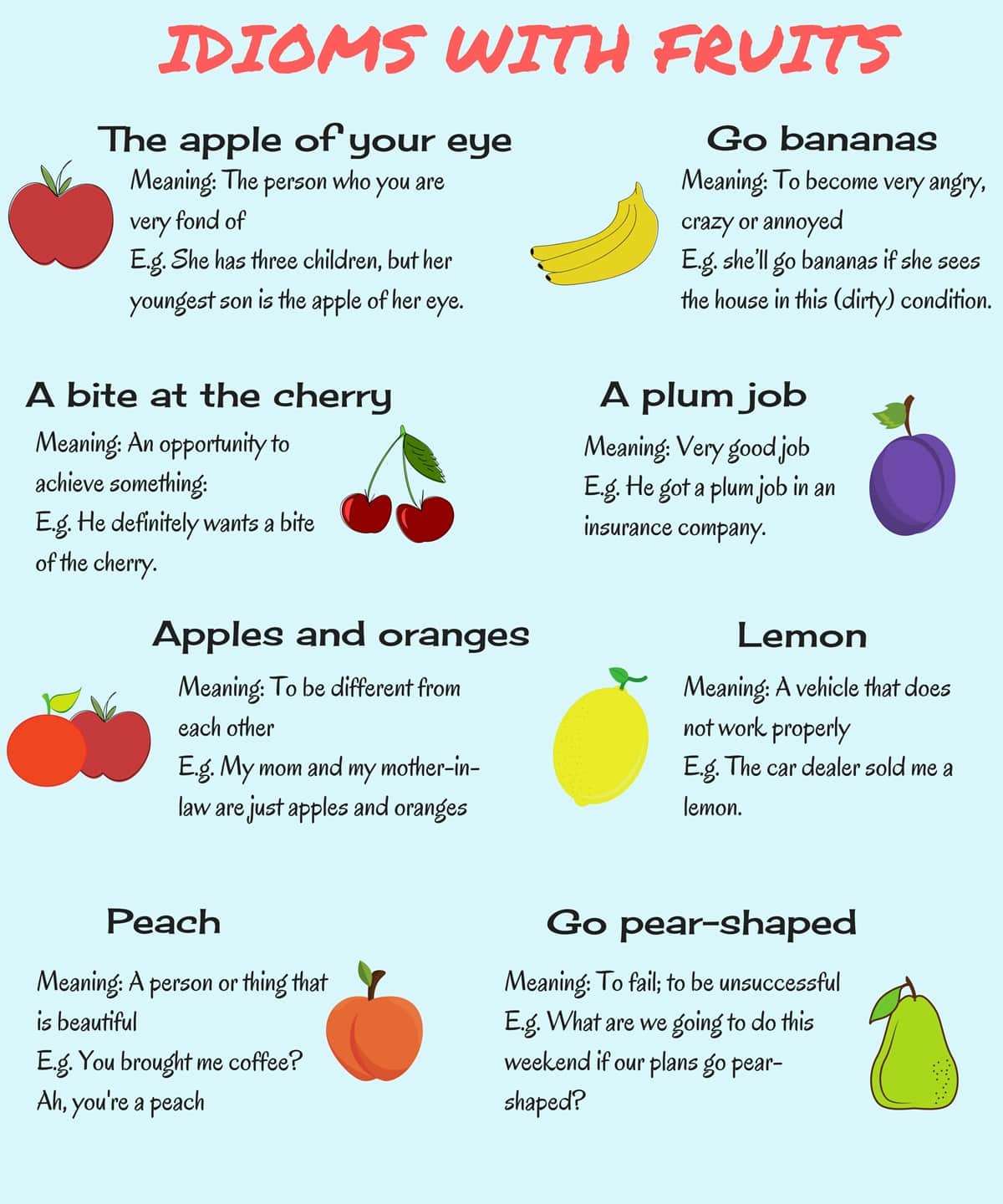 E.g. She has three children, but her youngest son is the apple of her eye.

E.g. She’ll go bananas if she sees the house in this (dirty) condition.

E.g. He definitely wants a bite of the cherry.

E.g. My mom and my mother-in-law are just apples and oranges.

E.g. The car dealer sold me a lemon.

E.g. You brought me coffee? Ah, you’re a peach.

E.g. What are we going to do this weekend if our plans go pear-shaped?

E.g. He got a plum job in an insurance company.

E.g. Her daughter soon showed her own musical talent, proving that the apple doesn’t fall far from the tree.

E.g. It is hoped the inquiry will pick out the bad apples in the police force… 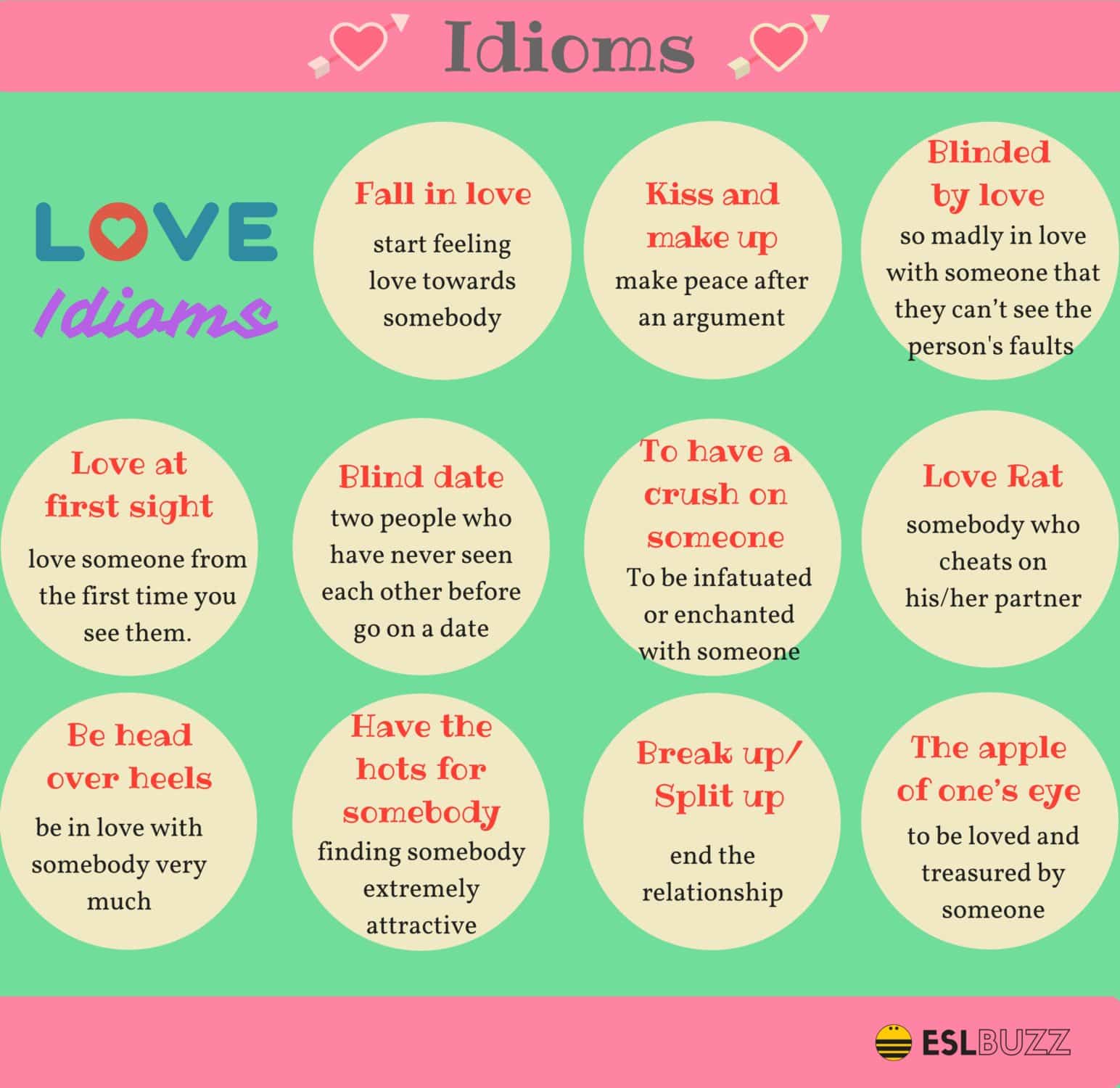 Eg: I think I’m falling in love with my best friend. What should I do?

Eg: My wife and I met at a party. It was love at first sight.

Eg: I didn’t know Chris and Sue were an item. They didn’t even look at each other at dinner.

Eg: “Do you think Matt and Amanda will get married?” – “I hope they will. They’re a match made in heaven.”

Eg: Look at them. They’re head over heels in love with each other.

Eg: I don’t want to go out with Jenny and David. They’re so lovey-dovey, I just can’t stand it.

Eg: She is so blinded by love that she can’t see him for who he truly is. He is not a good person, he is rude and disrespectful to everyone around him, including her.

Eg: My sister keeps organising blind dates for me. She’d just love to fix me up with someone.

Eg: Don’t even think about asking Jane out. How could you look your wife in the eye? Don’t be a love rat… 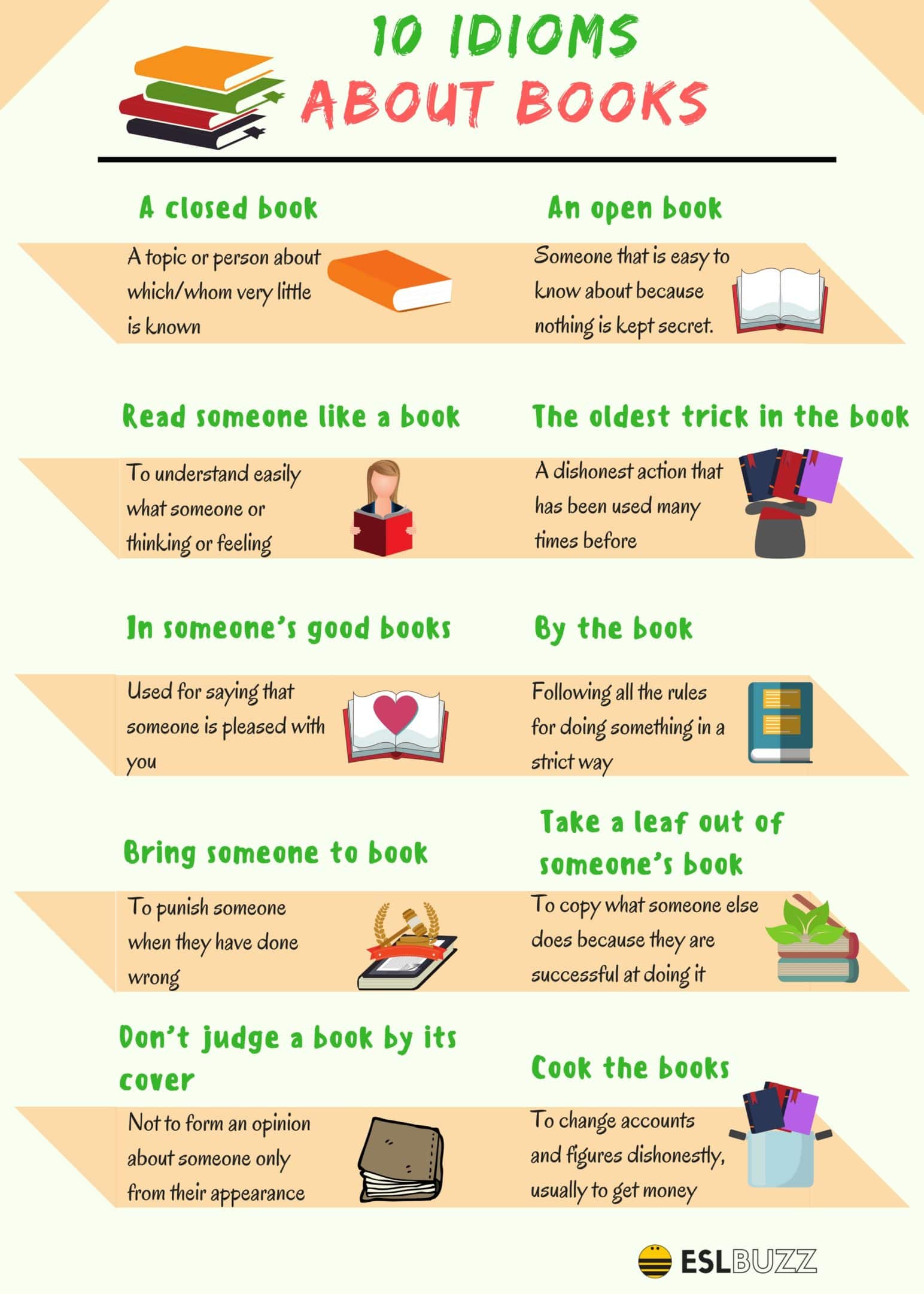 Eg: I’m a scientist, so art will always be a closed book to me.

Eg: Ask me anything, I’m an open book.

Eg: There are a number of books on the market which suggest that it is possible to learn to read a person like a book.

Eg: Look, you can fix it by threading a paper clip through the hole. Oldest trick in the book!

Eg: I cleaned the bathroom yesterday so I’m in Mum’s good books.

Eg: The lawyers want to make sure we’ve done everything strictly by the book.

Eg: Police should be asked to investigate so that the guilty can be brought to book soon.

Eg: I think I’m going to take a leaf out of your book and start going for a run first thing in the morning.

Eg: The candidate did not look very intelligent, but you can’t judge a book by its cover.

Eg: My partner had been cooking the books for years, but because I was the CEO, I got the blame for our company’s collapse… 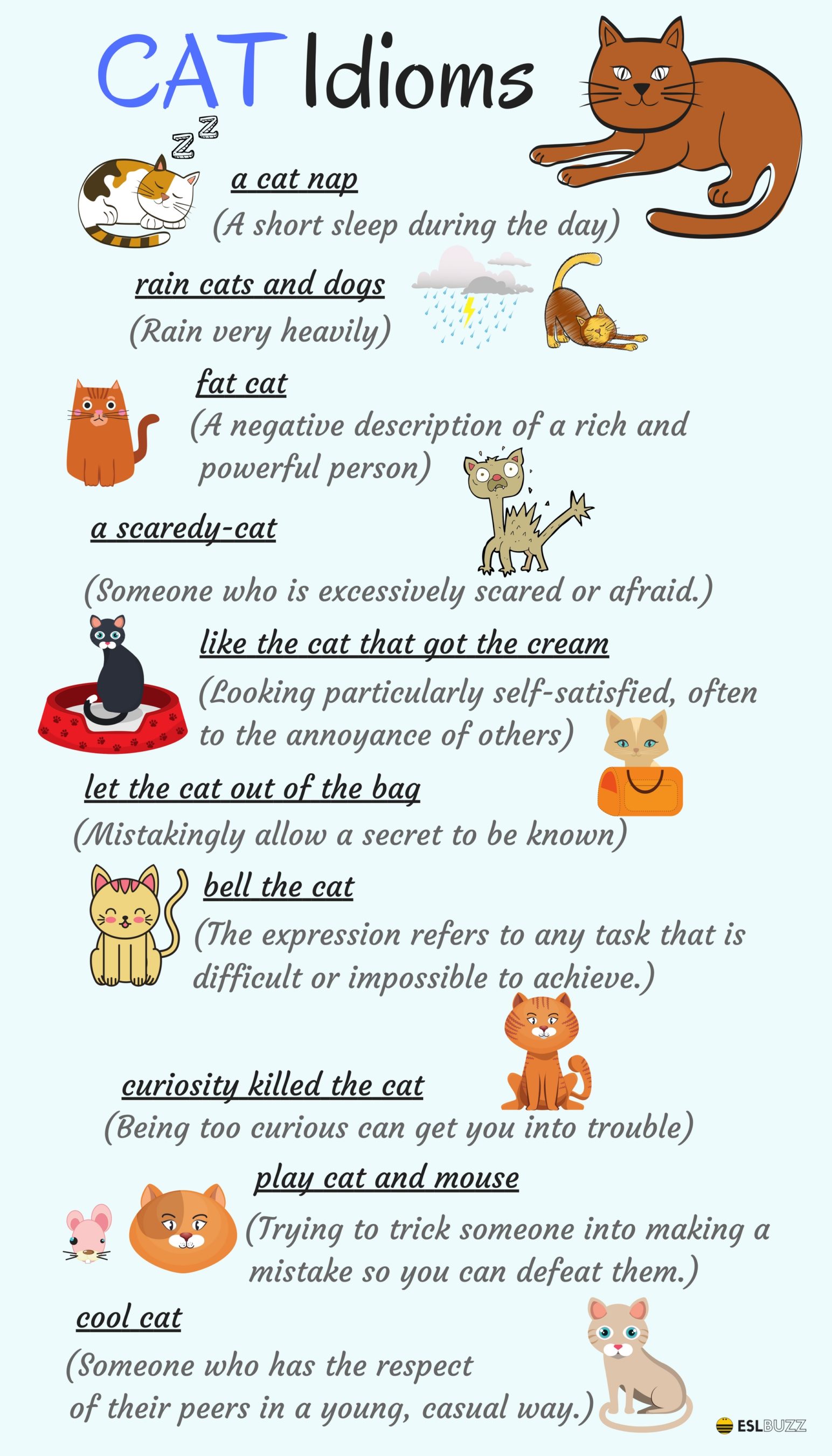 Meaning: Why are you not saying anything?

Meaning: Say or do something that causes trouble or controversy

Meaning: Looking particularly self-satisfied, often to the annoyance of others

Meaning: Mistakingly allow a secret to be known

Meaning: Continually arguing with each other

Meaning: When the person of authority is away, people will behave badly

Meaning: A negative description of a rich and powerful person

Meaning: Being too curious can get you into trouble

Meaning: When some something has no chance of success, it doesn’t have a cat in hell’s chance.

Meaning: When someone looks very untidy and messy, they look like something the cat dragged in… 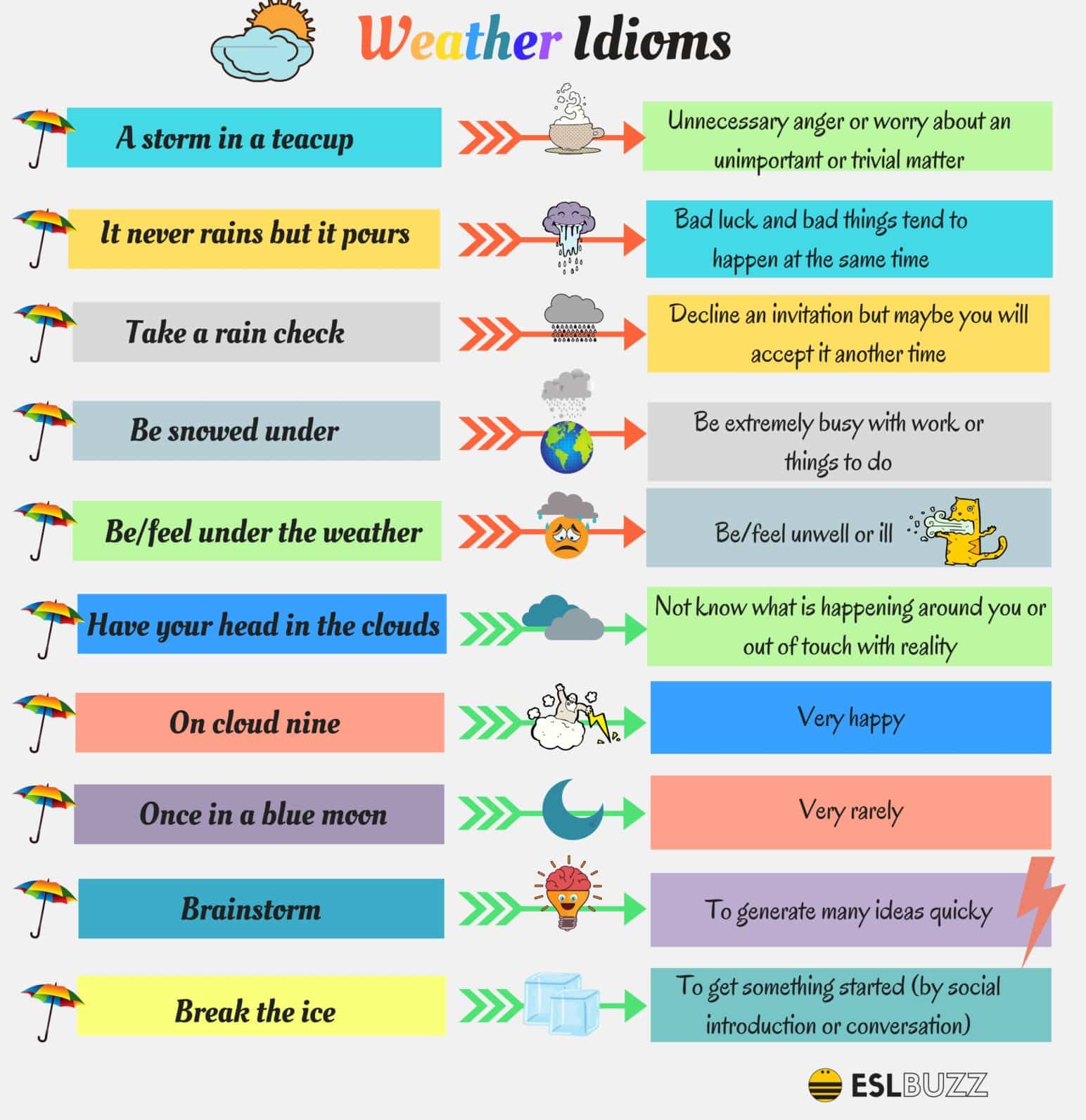 Eg: Our argument was no big deal – just a storm in a tea cup

Eg: I lost my wallet and now I’ve lost my phone. It never rains but it pours!

Eg: No thanks. I’ll take the rain check. Enjoy the party!

Eg: I’m snowed under with work. I’ve got so much to do.

Eg: I can’t finish my work today. I feel under the weather.

Eg: I can’t talk sense into him. He has his head in the cloud.

Eg: Let’s go out and soak up some sun

Eg: yesterday, I lay on the beach and catch some rays.

Eg: It has been at least 50 degrees every day this week!. The dog days of summer are here!

Eg: When my boyfriend proposed to me, I was on cloud nine.

Eg: I was kept in the dark about the intervention until a few minutes before it was a reality.

Eg: Let’s come back soon before the heavens open!… 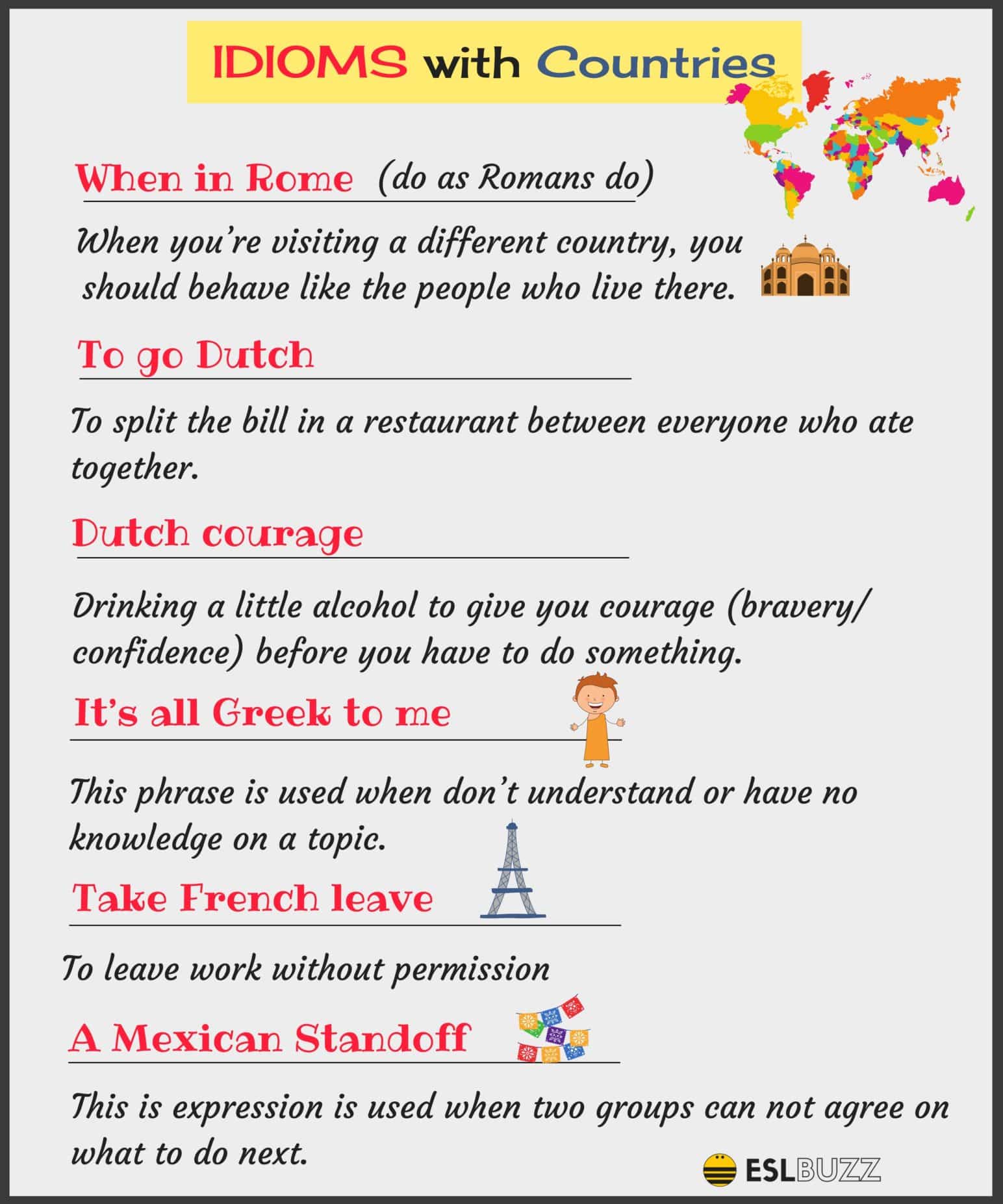 Eg: Sally said she wouldn’t let a man pay for her meal on a first date. She prefers to go Dutch.

Eg: I think I’ll have a glass of whiskey for Dutch courage before I ask that girl if she wants to dance with me.

Eg: I tried to watch a TV show about physics last night, but I gave up. It was all Greek to me.

Eg: All this talk about the President resigning is just Chinese whispers. There’s no truth to this rumour at all.

Eg: There seems to be a Mexican standoff in the talks as neither the buyer or seller can agree on a price.

Eg: I don’t love cotton candy, but we are at a carnival. When in Rome, right?

Eg: I’m so sorry I’m late. I couldn’t get away from Linda. She can talk for England!

Eg: Much as I love this Indian Summer,  I wish we had this warm weather in the summer rather than in October… 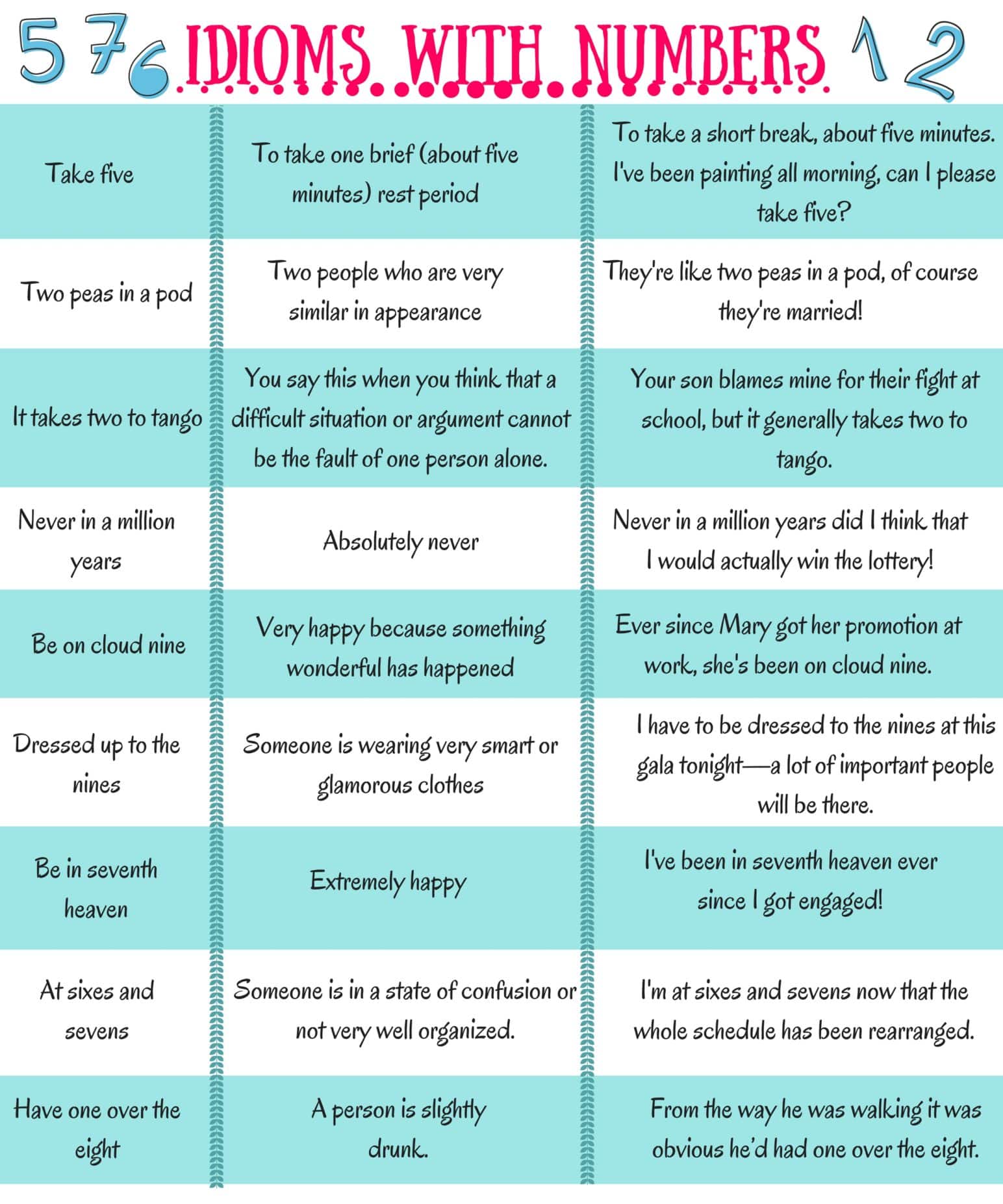 E.g. He got home from the party all in one piece.

E.g. The project failed, we’re back to square one.

E.g. When my mom bought me a computer, I was on cloud nine.

E.g. I’ll drop you off on the way to work, we’ll kill two birds with one stone.

E.g. I have a million and one ideas… 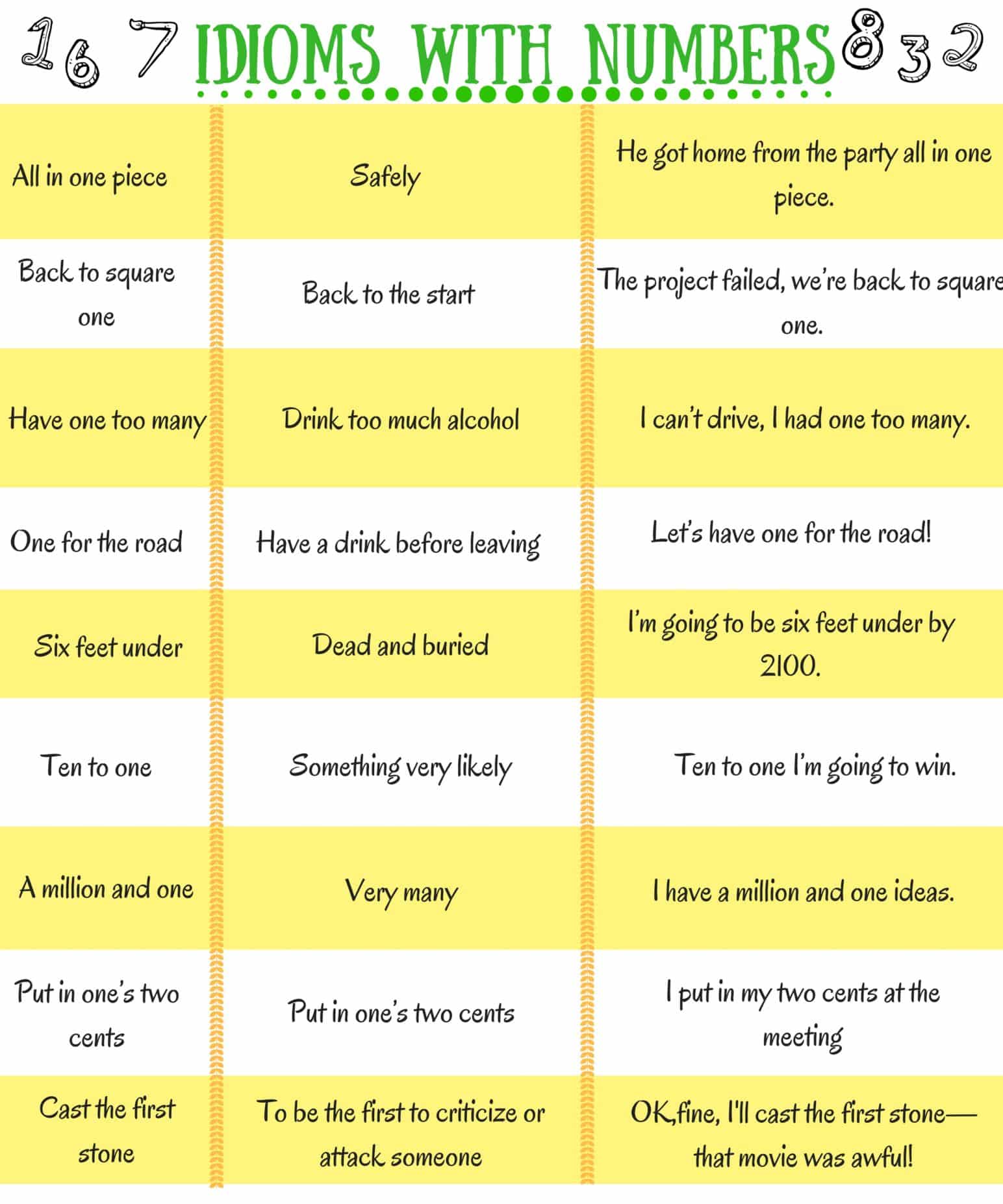 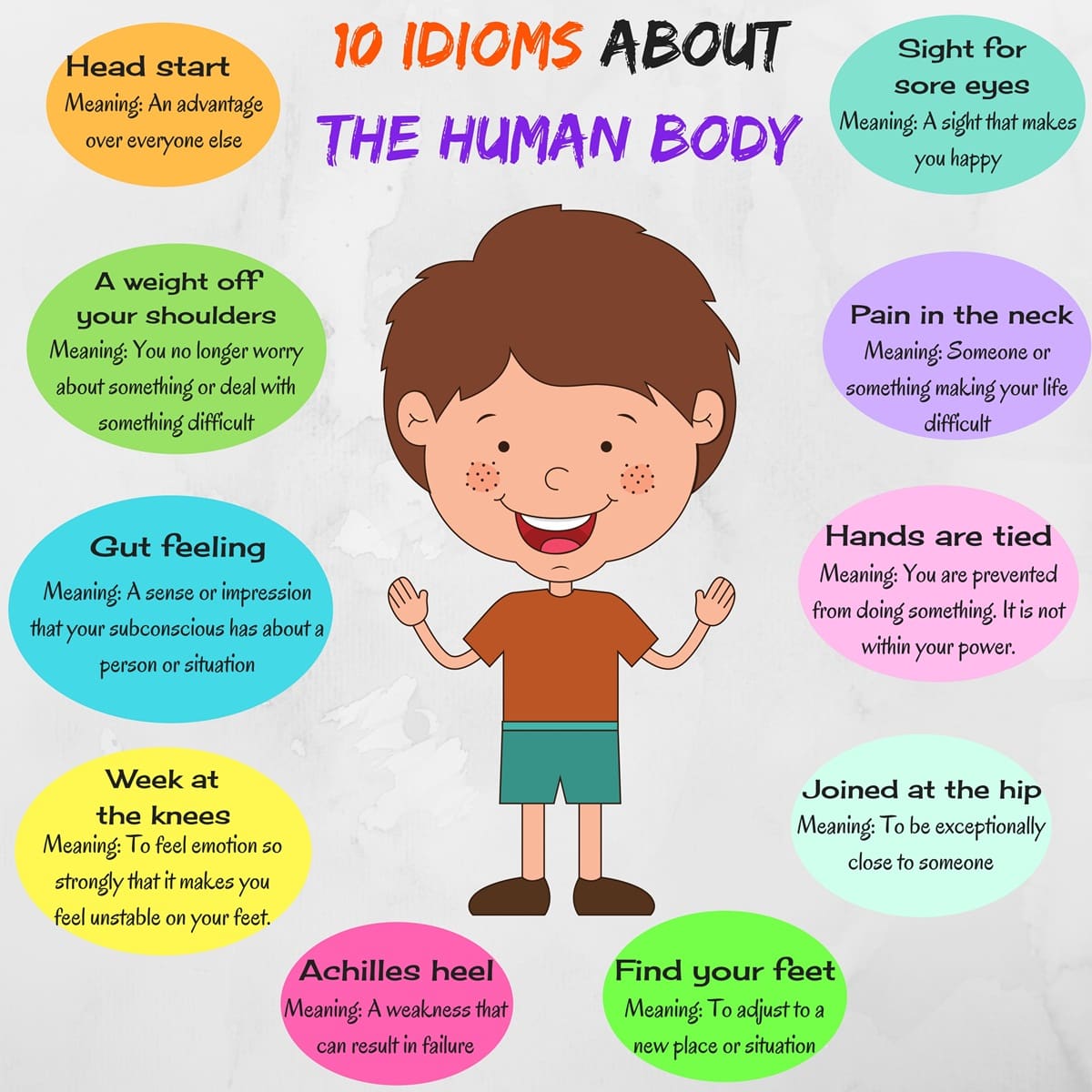 E.g. You’ve got a head start over / another’s trying to get the job because you’ve got relevant work experience.

E.g. Talking over my problem with my close friend was a weight off my shoulders.

E.g. This calculus homework is a real pain in the neck.

E.g. Jennifer’s mother had a gut feeling that something was wrong when her daughter wasn’t home by 10 o’clock.

E.g. I’d like to raise people’s salaries but my hands are tied.

E.g. Amy and her boss were joined at the hip; you never saw one without the other.

E.g. The thought of kissing him made me go weak at the knees.

E.g. Maths has always been my achilles heel.

E.g. Did it take you long to find your feet when you started your new job? 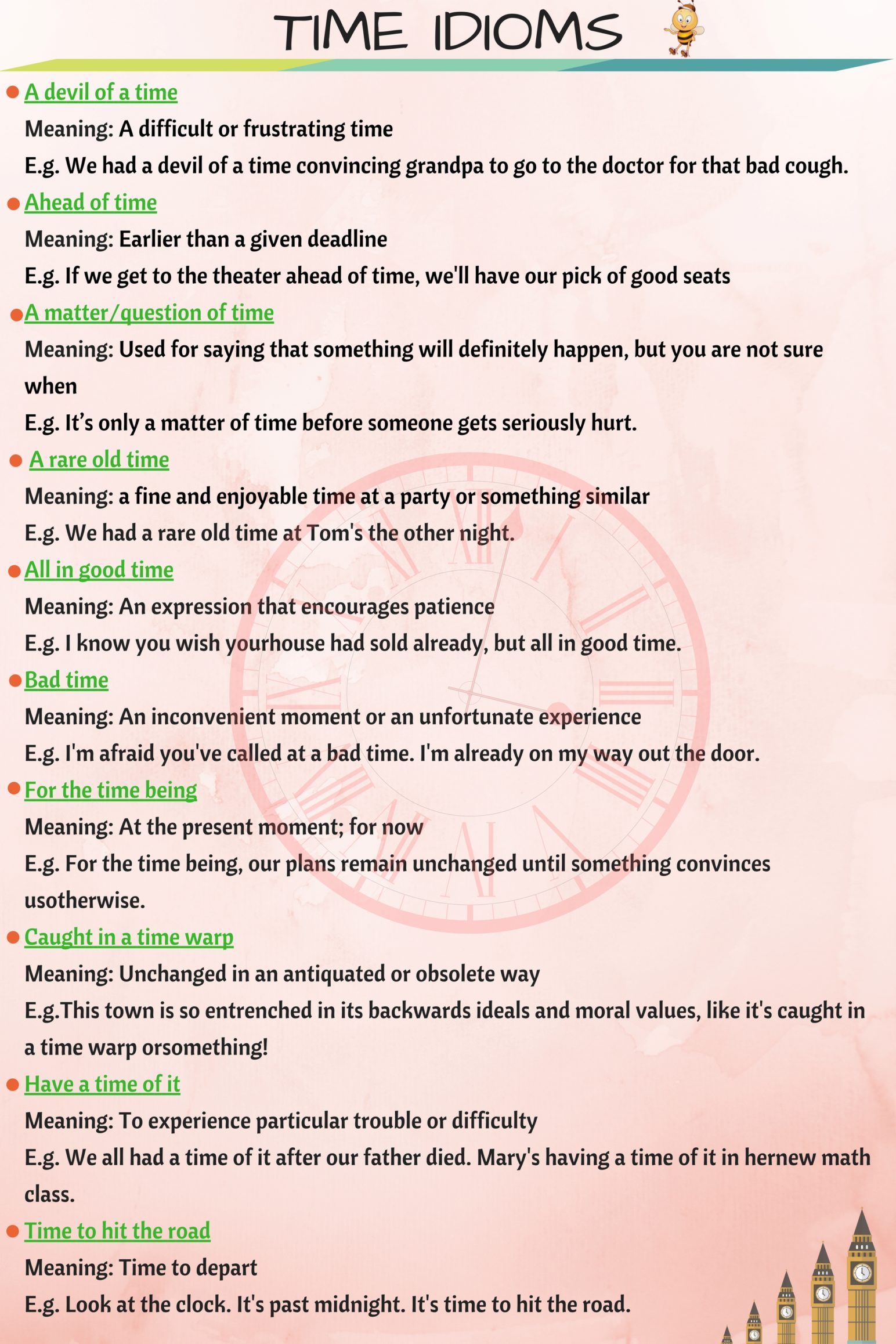 E.g. She is just stalling to buy time.

E.g. He did time in a California prison.

E.g. It’s a race against time to complete the construction.

E.g. The kids had a whale of a time at the theme park.

E.g. Look how fast our children grew up, how time flies.

E.g. It’s high time he met with me to resolve this issue.

E.g. I had to ask her out three times before she said yes. Well you know… Third time’s a charm.

E.g. Although she was late to the exam, she managed to beat the clock and finished all of it 10 minutes before the end.

E.g. We barely made the deadline, there was so much to do in this project we turned it in at the eleventh hour…